Home Gold - Royal Canadian Mint
You're using an older browser that we are unable to fully support. Your experience with our site may be less than optimal due to our focus on performance, security and reliability. Consider upgrading your browser if you have problems using our site. Learn More
New

RATINGS
Free shipping over $299
To ensure your complete confidence, every package we ship is fully insured and tracked, with a signature required upon delivery. Orders over $299 ship for free! Orders below $299 ship for only $19.95.
Best price guarantee
If you find a lower advertised price from an authorized bullion dealer, we will match that all-in price (including applicable fees and shipping costs) and offer a better experience. To receive your price match, give us a call during business hours. Please be advised, we can only offer the price match before your order is placed.

Own this 99.99% pure gold portrait of Kit Coleman, a woman of many firsts and a journalism pioneer.

Through her weekly columns, journalist Kathleen Blake Coleman (1856-1915) pushed the boundaries of expectation for women in journalism during the late 19TH and early 20TH centuries. “Kit” was a woman of many firsts: she made history 125 years ago by becoming North America’s first accredited woman war correspondent; she helped establish the Canadian Women’s Press Club and served as its first president; and later, she became the first syndicated woman columnist in Canada.

A pioneer deserving of her place on the 2023 Proof Dollar, Kit Coleman is also honoured on this 99.99% pure gold coin, which pairs a portrait of the trailblazing columnist with a map that traces her incredible journey.

A pure gold homage to a journalism pioneer.

Crafted in 99.99% pure gold, the coin’s reverse features an outstanding amount of finely engraved details, and it captures both the likeness and legacy of Kit Coleman.

PENCIL TO PAPER TO PRECIOUS METAL

The Toronto-based journalist is shown penning her weekly newspaper column, while behind her, the map traces her incredible journey—from her birthplace in Ireland to her life and career in Canada, and her many travels abroad.

Designed by Canadian artist Pandora Young, the coin’s reverse features a portrait of Toronto-based journalist Kathleen “Kit” Blake Coleman (1856-1915) penning her weekly column. The map in the background traces the trailblazing reporter’s incredible journey—from her birthplace in Ireland to her life and career in Canada, and her travels as North America’s first accredited woman war correspondent. The obverse features the effigy of Queen Elizabeth II by Susanna Blunt. The obverse also bears a special marking that includes four pearls symbolizing the four effigies that have graced Canadian coins and the double date of her reign.

"The biggest challenge was conveying the sheer scope of “Kit” Coleman’s accomplishments. She was intrepid, undaunted and a creative thinker, and those qualities took her on many wide-ranging adventures. Each time it seemed as if she was backed into a corner, she'd think up some ingenious new plan that only made her story more exciting. She elevated thought and discourse, as well as the voices and status of women—this is surely her most immortal legacy, and it is my hope that we can inspire collectors everywhere to learn more about Kathleen Blake Coleman." PANDORA YOUNG, ARTIST

"Kathleen Blake Coleman, or Kit as she was known to her readers, was a pioneer female journalist in Canada, whose story is told on this well-deserved commemorative coin. She was an Irish immigrant to this country, struggled with single motherhood, and supported her children by producing an eclectic, interesting, and lively women’s page in Toronto’s Daily Mail, which later became the Mail and Empire. She loved to travel and write about her adventures and in 1898, her newspaper sent her to Cuba to cover the Spanish American War, a groundbreaking assignment that won her international fame." DR. BARBARA FREEMAN, AUTHOR OF KIT’S KINGDOM: THE JOURNALISM OF KATHLEEN BLAKE COLEMAN

Each coin is encapsulated and presented in a Royal Canadian Mint-branded clamshell with a black beauty box.

ABOUT THE ROYAL CANADIAN MINT 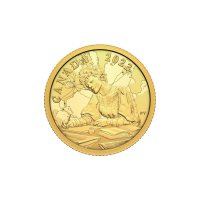